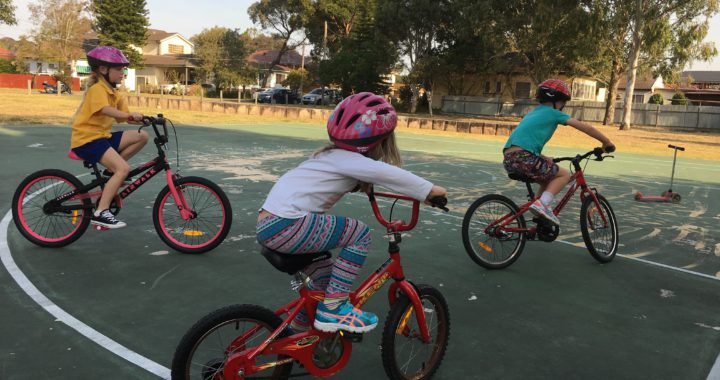 I am a single Mum with three kids ages 2, 5 and 7.  Over the years I have had to try a variety of different cycling options to keep me in the saddle while keeping the kids happy – and setting a good example.  My own father is a lifelong cyclist and when I had my own children, it became important to me that I show them from an early age the joy that could be experienced on 2-wheels.

When my oldest child had his first birthday his gift was a $100 bike trailer from Big W.  The trailer was simple enough to hook up to my very ordinary commuter bike and folded flat for convenient transportation and storage.  It was a simple trailer without any bells and whistles but served us well for five years. 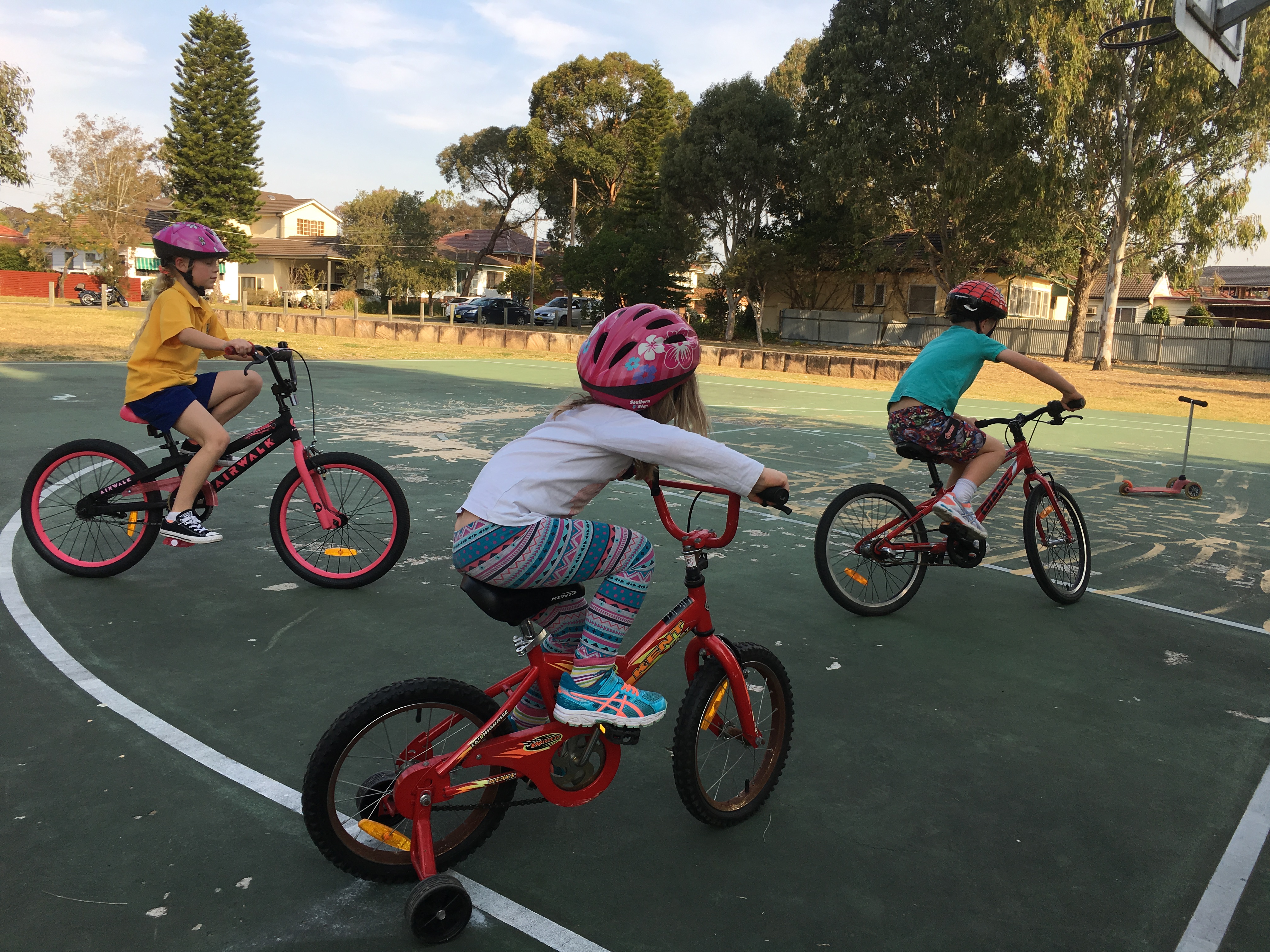 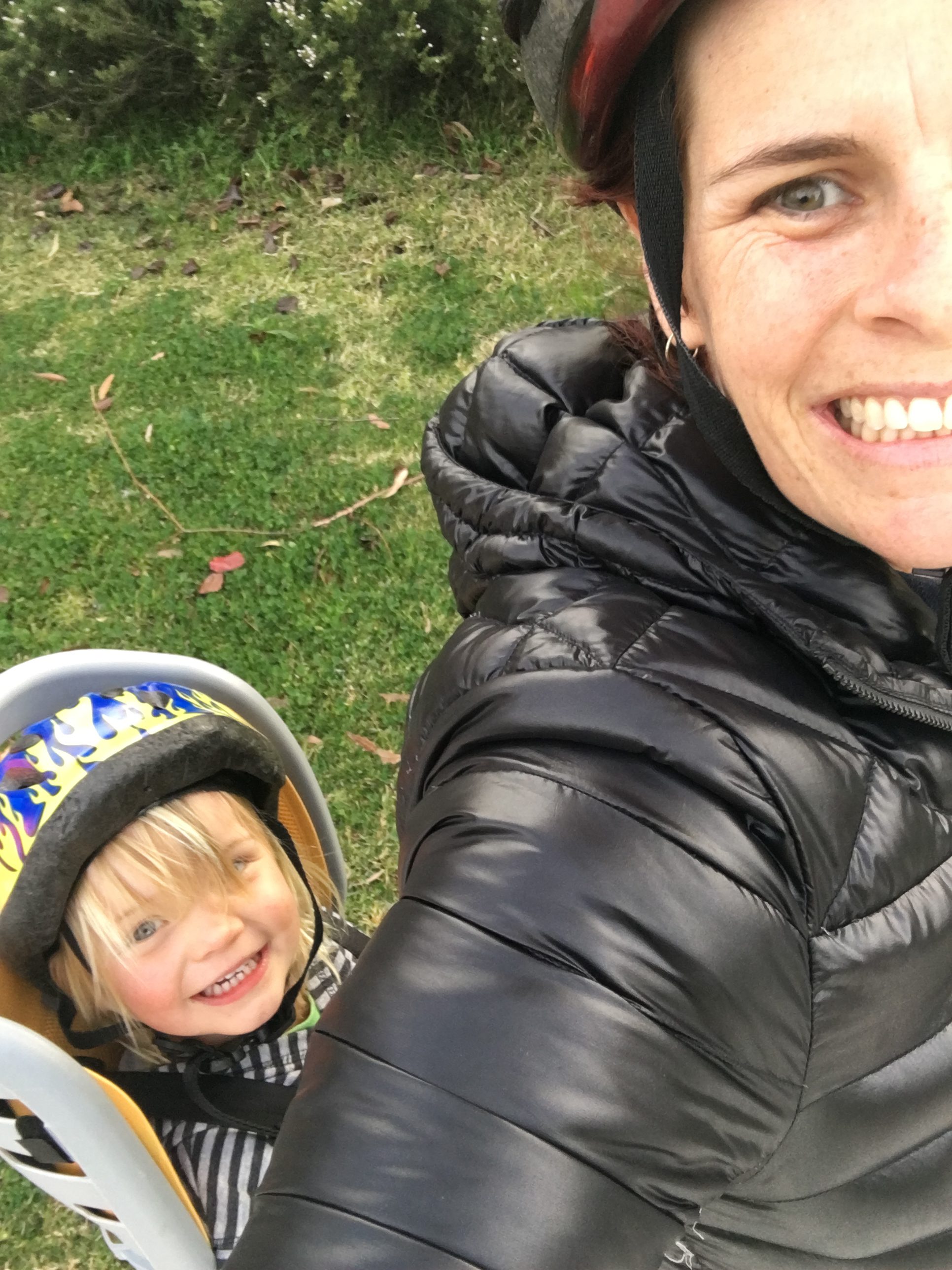 Then baby number 2 came along and once she was old enough we regularly hit the road.  It is recommended that children don’t ride on a bike until they have excellent head control.  The minimum recommended age is 6 months, but I felt safer riding with them from 9 months and didn’t do much riding until they had turned one - I also found it difficult to get a helmet to fit and stay on comfortably much before 9 months of age.  With two young children, riding was a great way for me to get some exercise and was guaranteed to send at least one of the kids to sleep.

Our bike trailer was light and, for the price, rather rugged.  It also had room in the back for a small picnic or swimmers and towels as well as other baby paraphernalia.  The other great feature was because the trailer had 2 wheels it wasn’t possible for it to tip over – even if the bike should fall the trailer would remain upright keeping the kids safe when loading and unloading.  The trailer also had a net to keep out bugs and a rain cover – we don’t generally ride in the rain, but this was great for keeping them warm on cold winter rides.  What I didn’t like was that the kids were so low to the ground- the trailer (even when using a flag) wasn’t very visible to cars, and should we be stuck in traffic the kids were both at exhaust pipe level from the neighbouring cars.

My kids are rather tall, and it wasn’t long before they outgrew the suggested height limit for the trailer – although we kept using it for long after that point.   As they grew it became an increasing workout for me to pull the weight of the trailer on my bike and we sought mostly flat routes.  I love to ride but when I am out with the kids it is all abought fun, exploring and being together and less about pushing the pace, serious hills, or rough terrain.

We also have a Trail-Gator attachment that allows you to turn any child’s bike into a tag-along bike by lifting the front wheel and attaching them to the back of an adult bike. The great thing about this is that the child can ride with you if you are going long distances or covering tricky terrain, but as soon as you reach a safe riding space you can unhook, and they can ride independently.   We only rode with this Trail-Gator Bicycle Tow Bar a few times as we had difficulty getting the child bike to attach correctly (operator error I am sure) but it is another option and something I would like to resurrect now that my oldest can ride under his own steam. 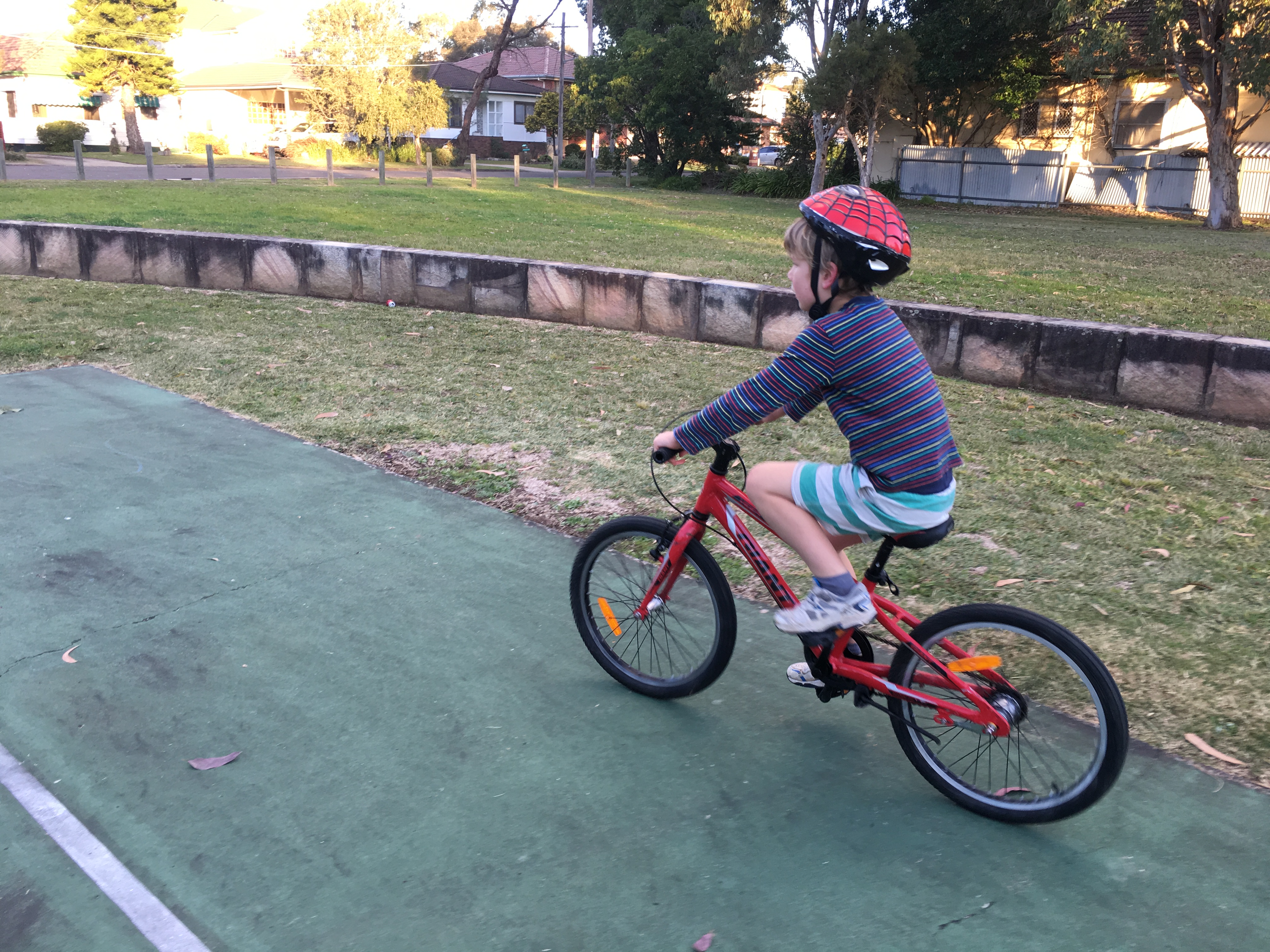 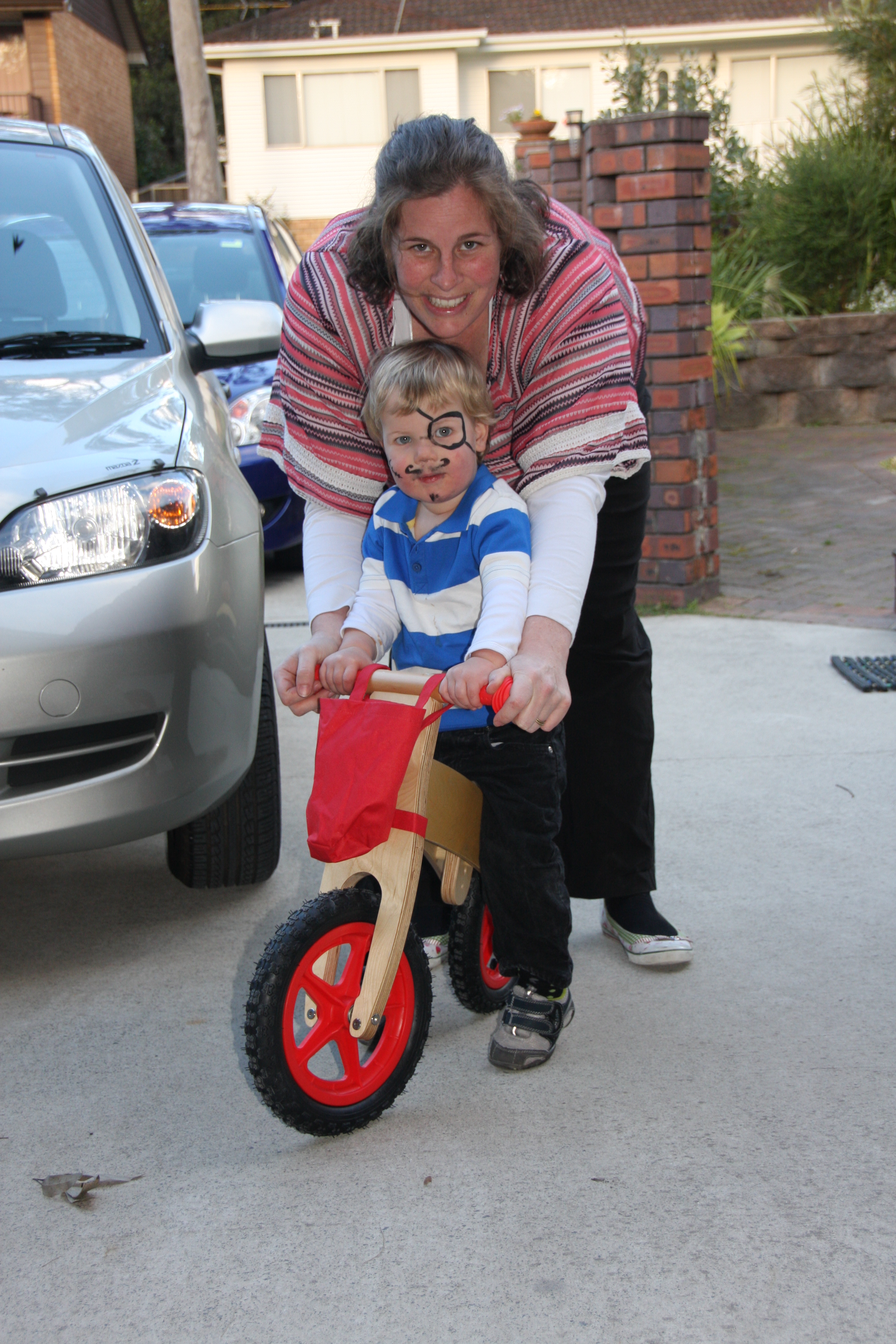 When I started to look for a new bike, we trialled different cargo bikes at specialist bike shops.  We loved the long tail cargo bikes and despite being a tad dubious at first, and worried about looking like a lightweight - I began to seriously consider an electric system.  But at around $5000 for a decent electric cargo bike it wasn’t an expense I could justify.

By this time child number three had joined our tribe and the bike trailer was no longer enough.  For his first birthday he got a Topeak Bike Seat.  This was the first time I had ridden with a rack mounted baby seat and I found it much harder to manage than the trailer.   The problem was that the baby seat made the bike very top heavy.  Given that you had to balance the bike while inserting a child, and then mount the bike yourself (especially difficult if you don’t have a step through frame) it was very easy to over balance the bike and on several occasions the bike (and the baby) hit the ground.

By this time my oldest child had started school and I made the commitment that if we did use our bike/trailer/baby seat combo to do the school run regularly in the first six months then we could justify the expense of a cargo bike.

It just so happened that shortly thereafter, the Taga 2.0 was advertised online as a special Kickstarter project at an affordable price (about $2800).  The original Taga was a bike I had lusted over when I only had one child, so I was thrilled they were now offering a bike that easily carried 2 in a bucket at the front with the option of carrying a third child in a rear mounted baby seat or tag-along bike.  There were lots of delays with the Kickstarter campaign and the bike took over a year to arrive, but it was well worth the wait.  We are now the proud owners of a four person “bike bus”.  The Taga 2.0 is a trike with an adult seat behind a bucket holding up to 70kg in a variety of configurations including baby capsule adaptors.

When we purchased the Taga 2.0 we had an option on whether to upgrade to an electric bike or not.  Boy am I glad we went for the eTaga.  The benefits of an ebike are enumerable.  The Taga bike itself is heavy (not to mention loading it with occupants and school bags) so pedal assist is lifesaving.  It also means that on hot days we can crank the pedal assist level up and arrive at school having cruised up the hills with barely any effort, and certainly without breaking a sweat.  The addition of a battery has certainly meant that we ride more frequently especially in hot weather.  Plus, it does give us a quicker trip when we are in a hurry. 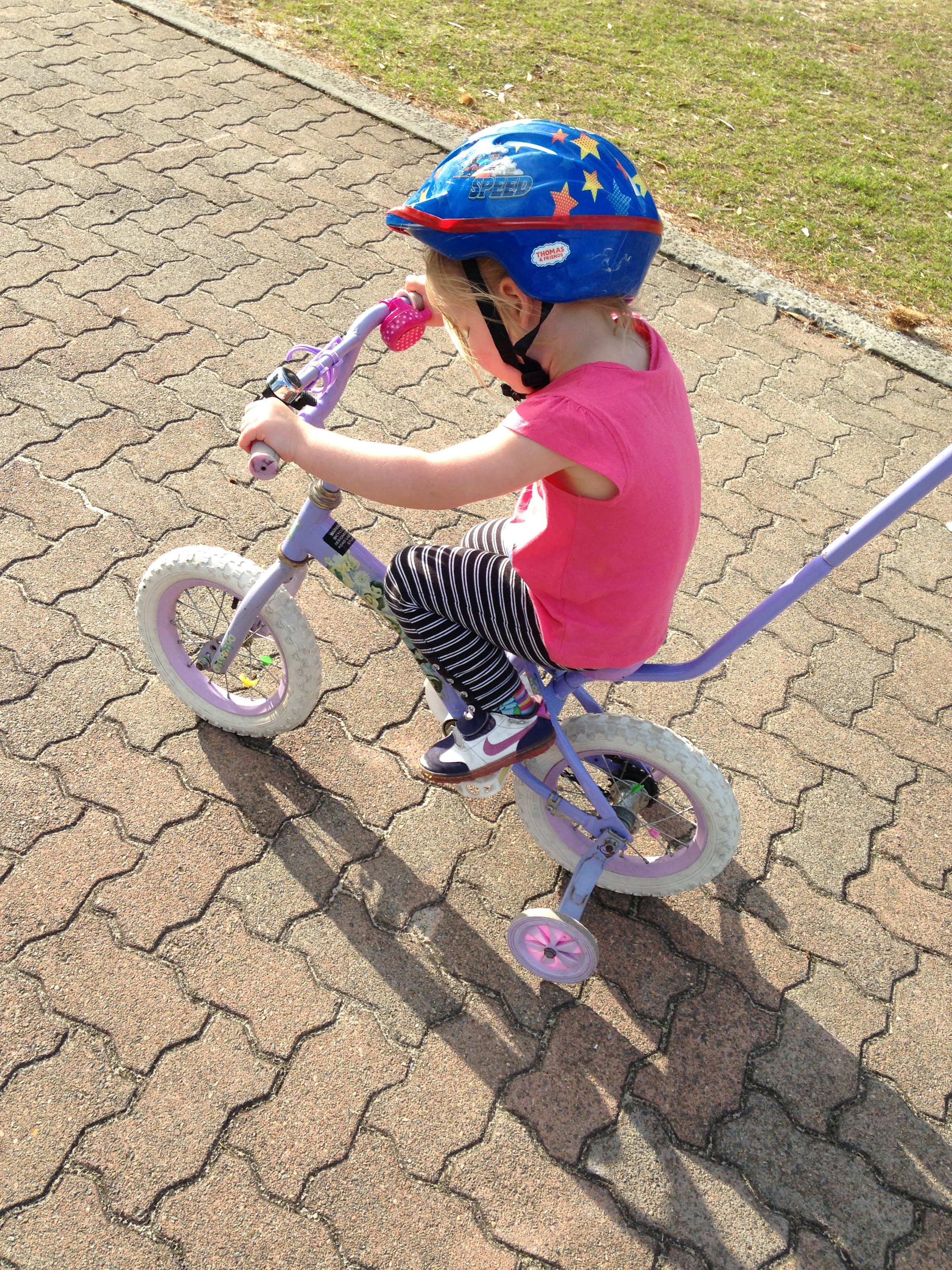 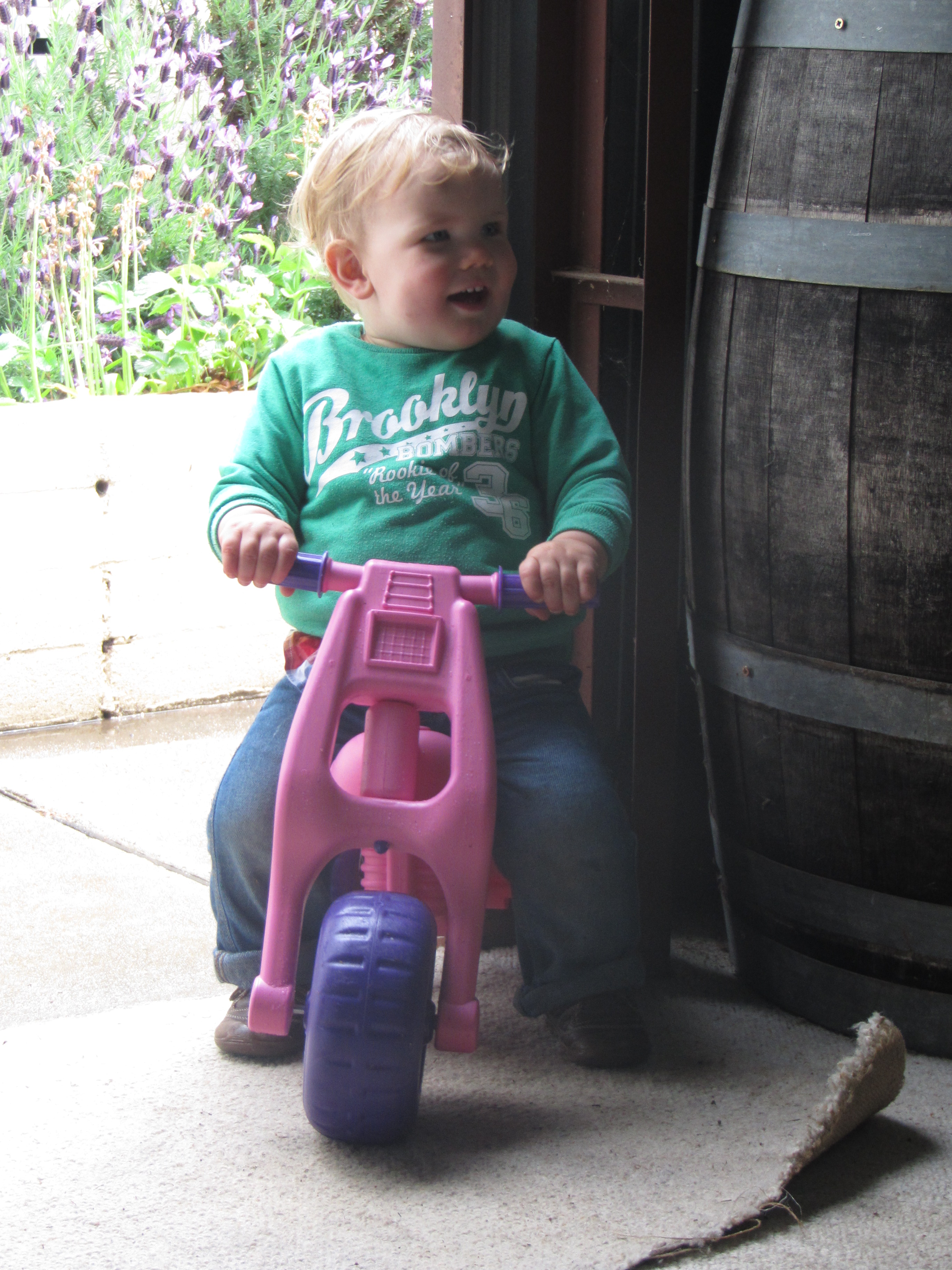 In NSW the law states that if you are under 12 or riding in the company of someone under the age of 12, you can ride on footpaths.  So legally I can ride our Taga trike on the footpath – however given its size, traversing around other footpath users and obstacles can be tricky, and we mostly ride on the road.  We are also lucky in that most of the regular routes we ride have wide roads with plenty of room for cars to pass around us.

I always try to be as courteous as possible when riding on the road.  Whenever there is space, particularly when riding up a hill, I move as close to the curb as I can to allow cars to pass.  We all wear helmets all the time, I also bought cheap tradesman’s vests in Fluro colours from Kmart and the child riding on the back wears one to make them more visible.  Our trike is very noticeable, and we are always waving and saying hello to people as we pass.  As rather obvious cycle enthusiasts we set the standards by which other cyclists are judged and we try and set them high.

I adore riding with my kids.  More often than not all three kids request transport by bike rather than car.  It is cooler (both in temperature and style) and allows us to ride right into the school grounds rather than fighting for a parking spot, walking in, and getting into a boiling hot car after school pick up.

If you are looking at ways to increase your riding with kids in tow, there are plenty of options out there.  Most keen family cyclists are happy to let you have a spin on their rig and many bike shops offer trial periods, so you can test the various options.  I highly recommend that you try all the options available before deciding – don’t forget that you need a set up that changes as the kids grow (or new ones join your tribe).

Our favourite locations for family rides

Reasons they are our favourites- easy parking, scenic rides with wide paths and not too many hills, toilet stops and non-cycle related bribes (I mean activities) for tired kids, a playground, beach, or water feature. 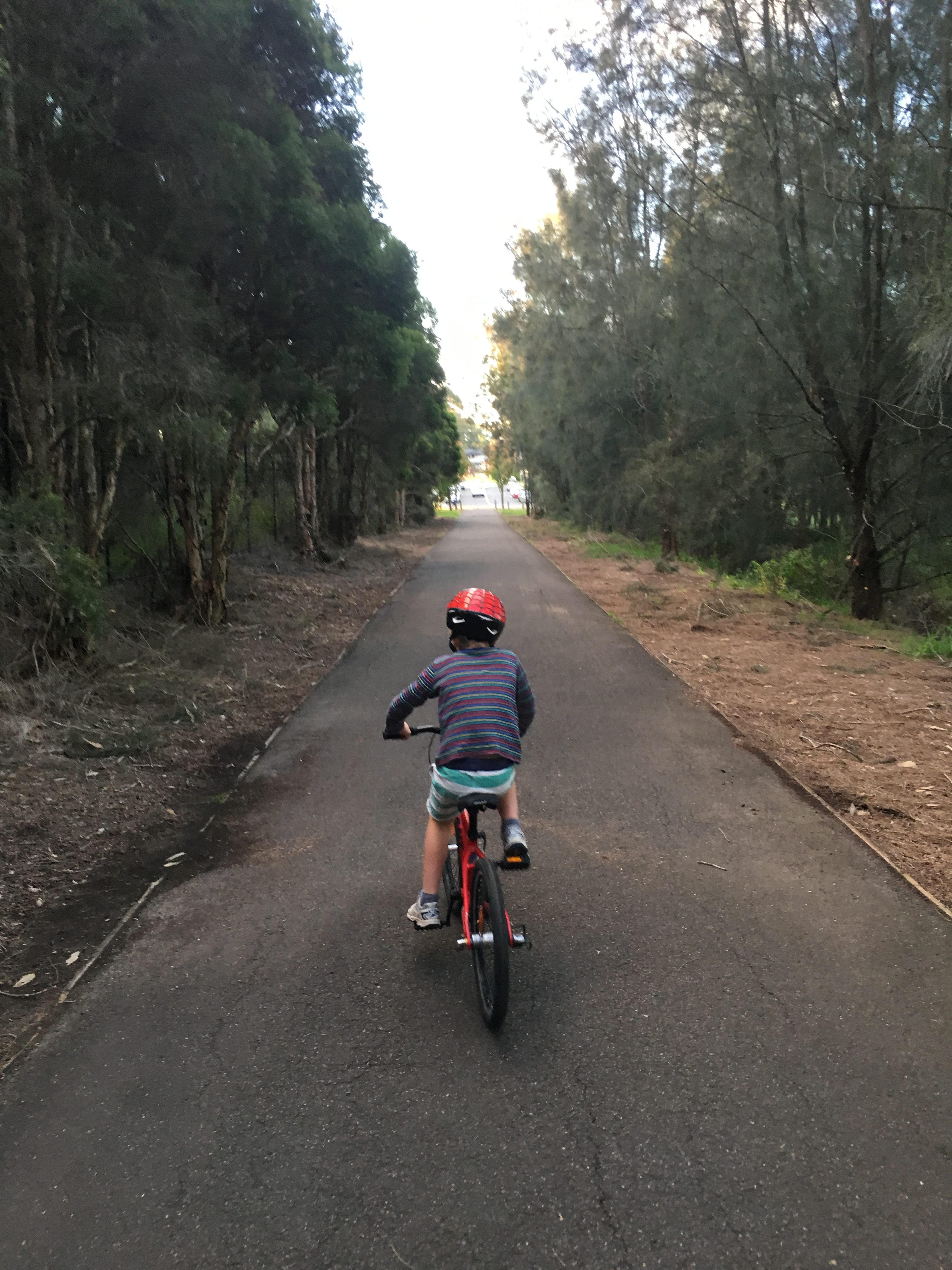