Doctor Michelle Chen’s husband bought her a bike in 2011 to celebrate her 40th birthday, however she could barely ride it and literally kept falling off. “My two little girls learnt to ride a bike much faster than I did. I have memories of lying on the gravel with grazes on my legs as they went whizzing past!” says Michelle. As a mother and emergency department doctor, Michelle realised she needed to master some new skills, bicycle riding, and quickly signed up to a GEAR UP GIRL workshop and their annual GEAR UP GIRL Ride. Little did Michelle realise that this humble act would lead her to representing Australia as a world class athlete.

“Learning to ride a bike over age 40 for women is intimidating and buying a bike is even worse. Everyone looks really fit and there are all these expensive looking things with gears, so finding a safe and encouraging environment is not always easy. Gear Up Girl had a great atmosphere with people friendly and encouraging. The workshop was instrumental in developing my skills in bike maintenance and fundamental riding techniques including cornering, stopping, starting and climbing. The coaches had experience of riding in groups and local knowledge of places to ride which were safe. It all comes together in a comprehensive, safe and fun workshop which was my launch pad to years of cycling.”

After successfully completing the 20km GEAR UP GIRL Ride in 2011, Michelle decided to put her new found cycling confidence together with some amateur running and swimming. One thing led to another, and it was not long before Michelle was exploring the world of triathlon. After her first sprint distance tri in November 2012, Michelle quickly developed her skills and qualified for the London Age Group World Championships in January 2013. But that was just the beginning! 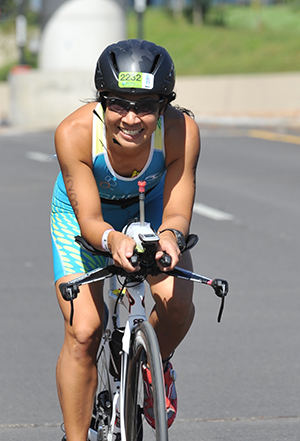 In 2014 Michelle went on to compete in her first Olympic distance triathlon as well as represent Australia in the Edmonton Triathlon Age Group World Championships for the sprint distance and standard distance. At the Chicago Triathlon World Championships 2015, Michelle competed in the sprint and standard triathlon distances and was the flag bearer for the Australian age group team in the Parade of Nations at the Opening Ceremony.

“I would very happily say that GEAR UP GIRL was one of the main catalysts in my triathlon journey because the bike leg was my weakest as I couldn’t ride in cleats. Gear Up Girl also made the journey so much fun! I don’t really care about splits and times, or what anyone else thinks of me, and the best races I have are the ones I just race for myself,” says Michelle.

And that is what GEAR UP GIRL is all about – developing the confidence and new skills to get out on a bike and have a go. As Michelle’s mum used to say to her “It doesn’t matter how many times you fall off your bike, it only matters how many times you get back up.”

Bicycle NSW presents its annual all female event on Sunday 13 March, now proudly titled the Heart Foundation GEAR UP GIRL Ride. The event welcomes bicycle riders of all ages and abilities from all parts of greater Sydney and NSW. With a choice of a 20, 40 or 60km route, there is something for everyone, demonstrated with the bonus KIDS RIDE FREE.